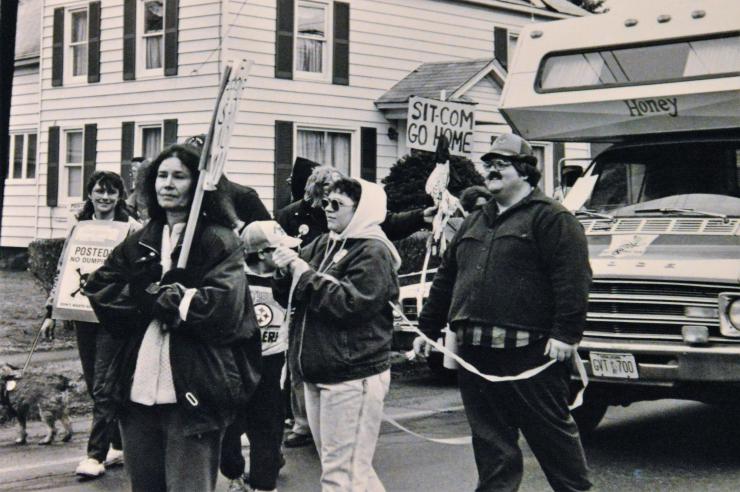 Thirty years ago the people of Allegany County adopted civil disobedience as a major tactic in our fight against the nuclear dump. Why was it so successful in thwarting the state’s efforts to site the dump at Allen, West Almond, and Caneadea?

The story begins on April 10, 1989 when Gary Lloyd and Stuart Campbell went to a CCAC (Concerned Citizens of Allegany County) meeting to argue that they should begin organizing for civil disobedience.  Both men believed that the democratic processes of scientific studies, legal challenges, and peaceful protest rallies would not stop the state from putting the dump in Allegany County.

Gary, who had grown up in Allegany County hunting deer, was incensed that the state might ruin this precious land with nuclear garbage.  He and other avid woodsmen had serious conversations about vandalizing bulldozers and drilling rigs with explosives. Although Gary didn’t have moral doubts about sabotage in this particular case, he worried that violent actions might create a backlash and divide folks in the County.  Far worse, someone could get seriously hurt. Gary had closely followed the Civil Rights Movement in the newspapers and wondered whether civil disobedience might work here.

Stuart, a history professor at Alfred University, had studied social movements and the ways economic interests had used brutal means against ordinary people. Civil disobedience, he believed, was one of the few effective ways that people without economic and political power might successfully win against the nuclear industry.

Gary and Stuart presented their case, but the reception was mixed.  David Seeger, CCAC’s lawyer from Buffalo, warned the leadership not to get involved, because the government could file lawsuits and seek injunctions that would both derail the legal progress that they had already made and drain their treasury.  Although some thought civil disobedience might be necessary in the future, others worried that it could lead to mob violence. In any case, CCAC was becoming overwhelmed with educational, political, and legal tasks.

After the meeting, Gary and Stuart realized that for civil disobedience to work in the county, they would have to begin organizing.  They found folks who had used civil disobedience in labor disputes, during the Vietnam War, and against despoliation of the environment.  Interest grew rapidly and 50-60 women and men soon formed ACNAG (Allegany County Nonviolent Action Group). They planned their first action: confronting the Siting Commission when it came to do a “Windshield Tour” of the proposed sites.  Nearly 50 people linked arms and surrounded the Siting Commission’s car when it pulled into the parking lot at the county courthouse in Belmont. After keeping the commissioners locked in their car for over an hour, Sheriff Scholes arrested the protesters.

The Belmont protest made civil disobedience respectable in the rural county.  Workers in the courthouse hung anti-dump placards from the windows and cheered the protesters when they were released.  Newspaper articles and letters to the editor in both the Olean Times Herald and the Wellsville Reporter were positive about the protests.  Representatives from ACNAG began holding civil disobedience training sessions around the county.

Between December 13, 1989 and April 4, 1990 nonviolent protesters linked arms on four separate occasions and stopped the siting commission from getting onto the sites. The success of each action drew more people to the next action until there were around 1,000 people at the final showdown in Caneadea. I have detailed this story in Linked Arms: A Rural Community Resists Nuclear Waste.

Why was civil disobedience in the county so effective? First, without the incredible leadership of Steve Meyers and many others in CCAC, the county would not have been unified enough to make civil disobedience persuasive.  CCAC leafleted the county with information and organized a massive turnout of 5,000 people (10% of the population of the entire county) to greet the Siting Commissioners when they came into the county. Local scientists presented a study to show that Allegany County was unsuitable for a nuclear dump.  Women in West Almond worked for many weeks on an anti-dump quilt. People publicized the potential spread of nuclear waste by making a canoe trip on the Genesee River from Belmont to Rochester. The BANDITS (Band Against Nuclear Dumps in This State) wrote and sang protest songs at many rallies, the most notable being at the “Night of Rage” in West Almond in the fall of 1989.

Second, civil disobedience was successful because the ACNAG leaders meticulously planned the various actions and worked diligently to maintain nonviolence. ACNAG’s success in drawing people to protect the sites had a downside, however—large numbers of people who had not been exposed to ACNAG’s civil disobedience training sessions began showing up at the later protests, especially during the last action at Caneadea.  Police, who had spent a couple of hours arresting “grandparents” chained across the Caneadea bridge, tried to get on the site, well over two miles away, by marching around the farm equipment blocking the road. In their apparent frustration, they began arresting people who were merely singing protest songs on the side of the road. 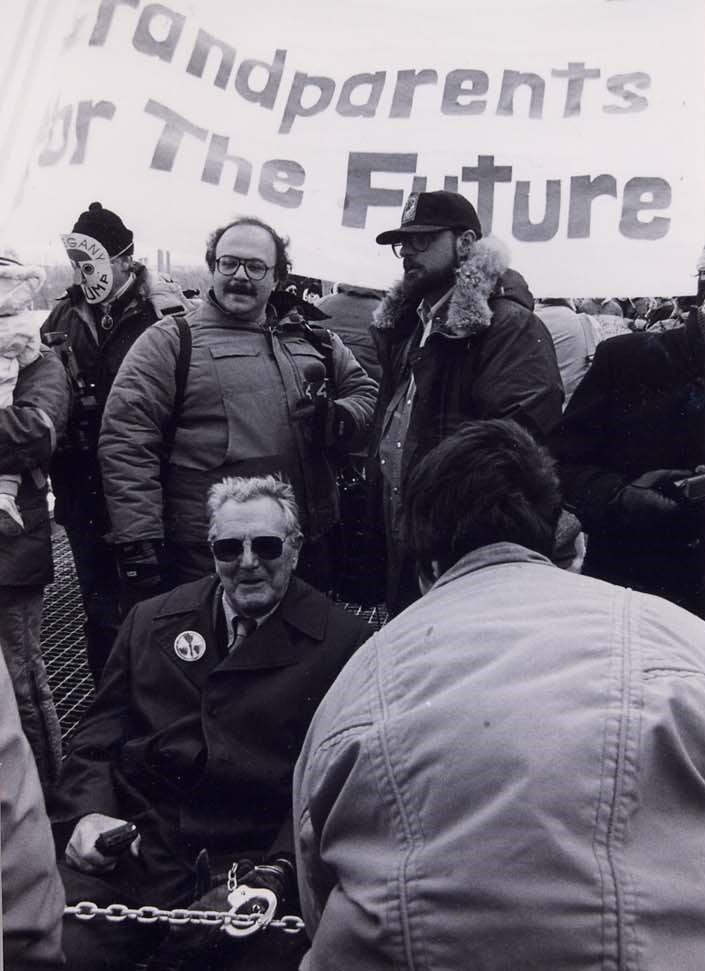 Although the leadership of ACNAG sent their most trained members to the Caneadea bridge, they knew that undisciplined and unpredictable people over whom ACNAG had no control were at many places on the site.  The leaders finally resorted to using horses to stop the police advance. Although that is still a controversial decision, ACNAG’s leadership believed that the horses prevented a bloodbath between the protesters and police.  Thankfully Governor Mario Cuomo decided to end the Siting Commission’s attempts to get onto the sites before there was a need for another action.

Thomas V. Peterson is Emeritus Professor of Religious Studies and Art Theory at Alfred University, where he taught for 36 years.  He was active in the nuclear dump fight and wrote Linked Arms: A Rural Community Resists Nuclear Waste (SUNY Press, 2002)

Follow Concerned Citizens’ FB page or join us at our next meeting.  Phone/text 585-466-4474 or email contactusccac@gmail.com. 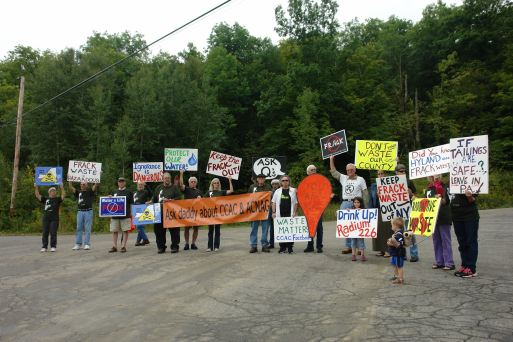 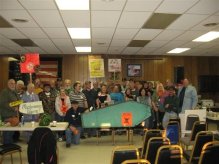 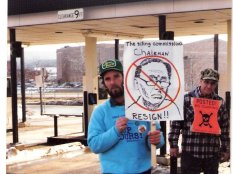 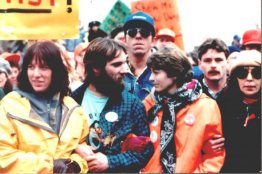 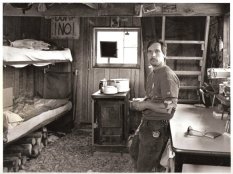